The founders, Philip and Francesca 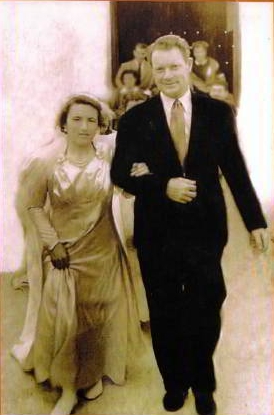 of the local community on Ischia during the second half of the 1900s.

On the wall of the passageway that leads down to Forio Marina you can still read the words da Filippo – “Philip’s Place”. They refer to Philip Dakin, an American eccentric who, shortly after the end of the Second World War, came to Italy with the dream of becoming an actor in the era of Fellini’s Roma.

He fell in love with the Island of Ischia and with Francesca Sacchetti, an Ischian girl, and opened the restaurant Il Saturnino with her, transforming into a well-known establishment what had originally been a storage warehouse for fishing nets.

Philip was from New York and had travelled around the world. Franca would cook and Philip took care of public relations.

So many people came to the restaurant from all over the world, and in the establishment you would find famous figures: painters, writers and poets, directors, actors, and many jazz enthusiasts.

The time-old tradition was to have an aperitif at the Bar Maria in Forio, the international bar, Ischian haven and cultural salon, and then head for dinner at Filippo’s, to eat, drink, and listen to good music.

The establishment was frequented not only by celebrities, but also often by young Ischians who, thanks to the restaurant, were able to widen their own horizons and come into contact with the world of culture.

Still today, our old-fashioned guest book holds the photos and autographs of some of the esteemed guests who have visited the restaurant.